Following BTS’ first Las Vegas concert weekend, ARMYs are calling out other fans after the members were seen nearly get injured at the exciting event.

Back on April 8 local time, BTS kicked off the Las Vegas leg of their “Permission to Dance On Stage” concerts at the Allegiant Stadium. Just like their previous concerts, BTS is performing for four nights at the “city that never sleeps,” with the seven-member group concluding their April 8 and 9 shows.

As always, “Permission to Dance On Stage” has been the talk of the town, with thousands of ARMYs taking to social media to talk about the exciting event. Concert goers have also shared numerous photos and videos of the BTS members on stage and interacting with fans. 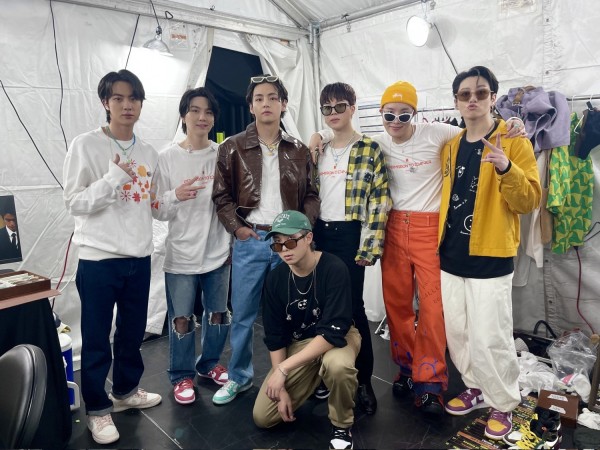 However, one part of the concert has fans criticizing ARMYs at the concert for their actions.

As part of their concert, members RM, Jin, Suga, J-Hope, Jimin, V, and Jungkook get to go around the venue by hopping on a cart which moves them around the stadium and returns them to the stage.

While both BTS and fans are given the opportunity to see each other up close, ARMYs at the venue began throwing toys and flowers, among other things, to the members as they pass by. In fact, some of the items almost hit the members and were able to dodge the flying item at the last second. However, some members weren’t as lucky.

NAH THAT ALMOST HIT JIN look at how much stuff is on the cart this is ridiculous pic.twitter.com/hMQG6LtapZ

In some of the videos that has been circulating online, some show Jin almost getting hit in the face, but was able to duck and avoid the item in time. Videos of the other members getting hit by flowers and other unidentified items were also shared.

In fact, one video showed Jimin losing his smile for a few seconds after his hand, which was covering his face, got hit by a flower bouquet

Please please stop throwing things at them! Today Jimin, Jin, and Yoongi almost got hit by the flower bouquet and plushies you threw. We don’t want any more injury to the boys.

In addition, the members’ carts were filled with toys and flowers, which could be dangerous as the members might accidentally step on them and get injured.

After seeing the videos shared, ARMYs, especially those who did not attend the concerts, became furious and have condemned the act of throwing items at the members without their consent.

Over on Twitter, numerous fans urged other fans to attending the concerts to stop throwing items at the members, especially as many of them were unaware that they were about to get hit. In addition, they stated that items should only be thrown when a member approves of a fan doing so.

It’s about time ppl stop throwing flowers at the tannies it’s really disrespectful and not to mention it could hurt them because of the speed with which they are thrown 💀 Yoongi almost got hit here on the face, and there was a video showing Jin being almost hit too. STOP THIS. pic.twitter.com/kA8GK8LnpV

Many are also particularly worried about Jin, as the random items being thrown at him could hit his injured hand. Back in March, Jin had to undergo surgery on his left hand to repair his damaged extensor after sustaining partial damage to the tendon on his left index finger.

Since then, Jin has been wearing a cast and limiting his movements to avoid aggravating his left hand and ensuring its satefy, which his doctor notes could cause additional surgery if it was injured once again.

Meanwhile, BTS will be continuing with their “Permission to Dance On Stage” concerts in Las Vegas on April 15 and 16 local time.