Sunmi Sheds Tears Talking About Her Family, Confesses to Feeling Guilty After Her Father’s Passing

During her guest appearance on “My Little Old Boy,” Sunmi sheds tears as she talks about her family, as well as opening up about her late biological father.

“You Can’t Sit With Us” singer Sunmi recently made a guest appearance as a special MC on the October 10 episode of SBS’ popular variety show, “My Little Old Boy,” where she expressed her affection towards her family and opened up about her late father.

“My father has been very ill since I was young. He passed away while I was still a trainee living in Seoul, so I couldn’t be with him until his last moment,” Sunmi said. 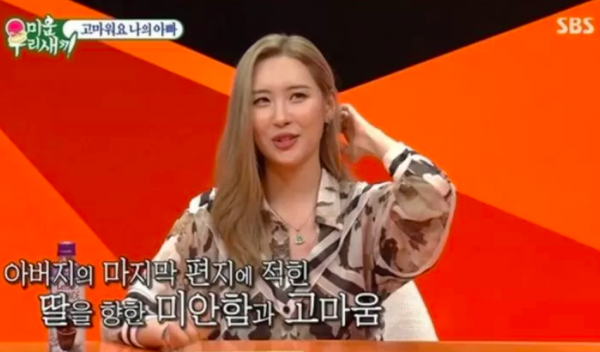 (Photo : SBS via Insight)
Sunmi sheds tears talking about her family, confesses to feeling guilty after her father’s passing

Sunmi also expressed her gratitude to her stepfather for raising three kids. “He raised all three of our siblings, who were not even related to him by blood, so beautifully. Thank you so much,” Sunmi said. 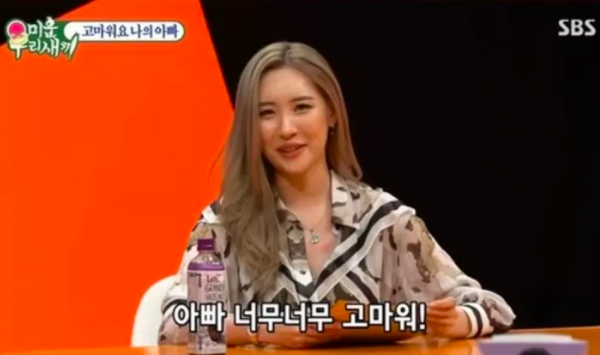 (Photo : SBS via Insight)
Sunmi sheds tears talking about her family, confesses to feeling guilty after her father’s passing

Upon hearing this, host Shin Dong Yup showed his admiration for Sunmi, saying, “I feel like you grew up very early. It’s because good adults have been supporting you.”

Sunmi, who has shed tears from her eyes while talking about her fathers, continued to express her affection for her stepfather. “Thank you so much, dad. I love you so much,” Sunmi said, adding that her parents would be watching the show.

Meanwhile, back in 2020, Sunmi appeared on the Mnet variety show, “Running Girls,” where she introduced her stepfather for the first time on broadcast. At the time, she also expressed her gratitude to her stepfather, who helped all of her siblings attend college. “I have so many things to be thankful for,” Sunmi said.

Back in February of this year, Sunmi released single album, “Tail,” with the title track of the same name. In August, she released her third mini-album “1/6,” with “You Can’t Sit With Us” as the album’s title track.

Most recently, she released her digital single “Go or Stop?” on October 11.

Sunmi is currently appearing as a mentor on the Mnet survival program “Girls Planet 999.”